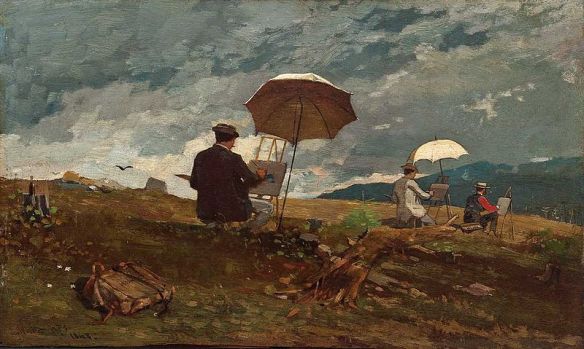 The famous painting by the New England artist Winslow Homer, called Artists Sketching in the White Mountains. (It is in the collection of the excellent Portland [Maine] Museum of Art, where Raymond and I have seen it in person. The museum is a must-visit if you are in the terrific city of Portland.) It’s meant to be an amusing picture, I think – the row of painters sketching each other painting – but I’ve also always liked it because it reminds me of when the students at the Actinolite art school used to come to Queensborough all at once to paint and sketch.

In yesterday’s post I wrote about how the Queensborough area seems to hold an attraction for people of an artistic bent. Photographers, filmmakers, craftspeople and painters are to be found throughout the area. But this is not a new phenomenon.

When I was a kid growing up at the Queensborough Manse in the 1960s and 1970s, it was a common thing on pleasant spring and summer days to see the town invaded by “the artists.” “The artists” were students at the Schneider School of Fine Arts in nearby Actinolite – Actinolite being the only other hamlet, besides Queensborough, in all of vast and rocky Elzevir Township, Hastings County.

I expect this is one of the then-150-year-old log buildings moved to the art school when it was established in 1963. Now it’s almost 200 years old!

The school, no longer extant – more on that a little bit later – was founded by Mary and Roman Schneider in July 1963, so was very new when my family moved to Queensborough exactly a year later. The Schneiders, according to Jean Holmes’s history book Times to Remember in Elzevir Township, “came to Canada in 1950. Having become active in Toronto’s art world, they would come to this area (i.e. Elzevir) to paint. They loved the land and thought that it would be an artist’s dream,” and went on to purchase some land on the banks of the Skootamatta River just off Highway 37 at Actinolite. They moved two 150-year-old log houses from nearby Tweed to use for a studio and office, and the school was on its way.

(An online search tells one more about the Schneiders. According to the Canadian Women Artists History Initiative at Montreal’s Concordia University, Mary Schneider was born in Vilnius, Lithuania, and became a recognized painter in Eastern Europe; she married her husband, a professor of applied art, in Warsaw, Poland, in 1935. They were interned in work camps in Siberia during the Second World War. Once they established their school at Actinolite, “a number of Canadian artists, many hailing from Toronto, Montreal, and other urban centres, spent their art holidays” there.) 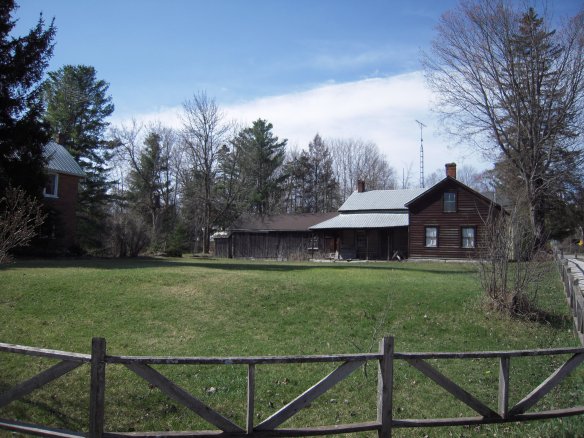 A favourite subject for the Schneider School artists: the old clapboard home, always very badly in need of paint, of our neighbour, Wallace Kincaid. 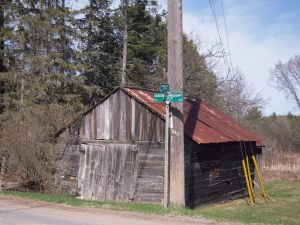 The shed/garage (and former blacksmith’s shop) that was attached to the property of Billy “Nub” Wilson. Just the kind of thing the artists loved to paint, much to our bemusement.

When I was little I didn’t know much more about the Schneider school than that it existed and that its students would regularly pile into our little village of a morning (whether they came in separate cars or were bused in I don’t know) and commence to setting themselves up in front of their easels at many different corners. They always favoured the buildings that we thought were ugly because they were old and maybe to a greater or lesser extent decrepit. (Of course I know now that such historic and perhaps faded buildings are much more interesting to look at, from an artistic point of view, than most modern and neat and tidy ones.) The often-vacant and very old (and unpainted) home of our neighbour, a bachelor named Wallace Kincaid who spent much of the year working somewhere far away, was a particular favourite.

The Manse as painted by Queensborough artist Norah Hiscock – a piece my father commissioned partly because none of the art-school artists ever chose it for a subject.

(We Sedgwicks always felt a tad slighted that never once did any of the artists plant themselves down in front of the Manse and tackle it as a subject; broken-down old garages that had once been blacksmith’s shops seemed, puzzlingly, to be of far more interest to them. That was why my dad commissioned Norah Hiscock, a fine artist who lived just outside Queensborough, to paint the Manse; her picture hung in the Manse living room all the time we lived there, stayed in the family afterward, and now that we’re back there Raymond and I have recently returned it to its same place at the Manse.)

For the kids (and not just the kids either) of Queensborough, it was an entertaining exercise to mosey quietly up behind an artist and look over his or her shoulder as he or she worked. As I recall they didn’t generally mind this, though you wanted to be quiet and unobtrusive. The two things I remember vividly are the smell of their paints, which I think were generally, or at least often, oils; and how their version of the building or scene they were painting would differ in intriguing ways from the actual scene one could see with one’s eyes. The eye of an artist was a mysterious thing.

The cabins on the art-school property. If you’re an artistic type, perhaps you can imagine yourself staying there and venturing out to picturesque spots like Queensborough to sketch and paint.

I was interested in this plaque, affixed to a small log building over the well that once served, and maybe still does, the little conglomeration. It commemorates the well having been donated in 1967 by a patron of the school, Mrs. Franc R. Joubin. Her husband, I have just discovered thanks to the wonders of the internet, was a very famous Canadian mining-industry leader who founded the Blind River (Ont.) uranium mines.

Not long ago Raymond and I drove into the laneway off Highway 37 that leads to what used to be the Schneider School and is now a place called Bridgewater Retreat. It was the first time I’d ever been there. We saw what I imagine was one of the 150-year-old log buildings (now considerably older than that!) that the Schneiders had first moved there; there are also several little cabin-type buildings, like in an old-fashioned motel complex, that I suppose were built for the artist students to stay in. It’s quite a pleasant setting and there seemed to be some kind of gathering of “wellness practitioners” going on there at the time of our visit.

Perhaps one reason I was thinking of the Schneider school and “the artists” today is that Raymond and I are in New England, where artists’ colonies – at places like Ogunquit and Monhegan Island, Maine, and Cape Ann, Massachusetts – are well-established and time-honoured things. It would be incredibly cool if the Queensborough-Actinolite area still had an actual arts colony/school. But then again, what it does have are a considerable number of artists in many media, still drawing inspiration from the landscape that Mary and Roman Schneider “thought…would be an artist’s dream.”

So the tradition, and the Schneiders’ dream, live on.

17 thoughts on “When the artists invaded Queensborough”