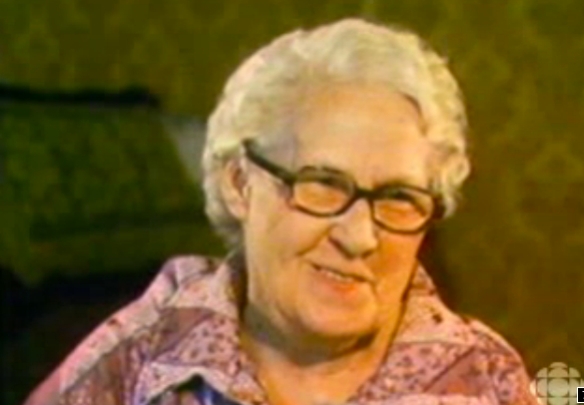 Goldie Holmes appearing on a 1980 episode of the CBC-TV series Heartland. As she answers questions in her Queensborough living room she looks so – well, so Goldie. You have to love her smile.

Kitty-corner from the Manse in Queensborough is the home that belonged to Art and Goldie Holmes when my family lived there in the 1960s and 1970s. They were good neighbours and good people – and Goldie was famous!

Well, famous by our standards anyway. How many people do you know who’ve been featured on national television, and had shows of their work at prestigious Toronto galleries? Not to mention having a song they’d written be recorded and even published as sheet music? (Remember commercial sheet music? It was before my time too, but I well recall how impressed I was when Goldie pulled out the music for her song, the name of which is lost to my memory, featuring a picture of the male performer [name also lost] on the cover.) Goldie and Art Holmes’s house, as rendered in Goldie’s quilting. “Holmes’ House of Threads” read the sign that hung outside on the front porch once she became well-known for her work. The small building at right rear is, I believe, the outhouse.

But while poetry and songwriting comprised one of her talents, what Goldie was mostly known for was her quilts, many of which featured buildings and scenes of the Queensborough area. It was folk art extraordinaire, and in the 1970s when interest in folk art was growing, it attracted national attention. In 1980 the CBC-TV show Heartland, hosted by none other than Sylvia Tyson (formerly of Ian and Sylvia), featured a wonderful segment on Goldie and her work; click here to watch it. If you knew Goldie, you will be charmed to see her in action again, see her kind and down-to-earth manner as she quilts in the living room of her Queensborough home and answers Tyson’s questions about her art and craft. In re-watching it just now I was struck by the fact that she says it was “the artists” – that would be the people I wrote about recently who studied and worked at the Schneider School of Fine Arts not far from Queensborough, and who often came to our little hamlet to sketch and paint – who persuaded her that her quilts were art, and helped spread the word about it. She says:

“It was just through the artists that I got, well, got publicity. And it really made me feel good when they said I was an artist and I said no, it was just a hobby, so they said, ‘Well, don’t call it just a hobby, because it isn’t a hobby, it’s art.’ So I don’t know, I guess maybe it’s art all right.” And then, being Goldie, she changes the subject. 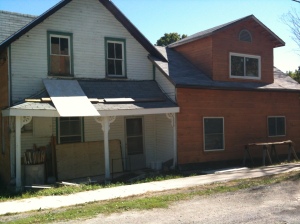 Goldie and Art’s home as it appears today. It’s under renovation and by the time you read this the white clapboard will have been completely covered with new wooden siding. But it’ll always be Goldie’s house to me.

So there you have it: an artist unawares. Her work became more and more recognized, which led to gallery showings and the CBC-TV segment. All this time, Goldie and Art lived in their simple house across the way from us – their dog, Lady, was the steady girlfriend of our family dog, Finnigan, I feel compelled to report – and it is lovely to see her in her own surroundings in the video. I also have to smile about what might have happened during the shoot had Sylvia Tyson or any of the crew needed to use the facilities, because Goldie’s house never had running water. Until the day she died seven or eight years ago, well into her 90s (Art died some years before), she continued to use the outhouse. Amazing how sturdy (and traditional) these people were.

I also love what Goldie has to say about why she did her Queensborough-themed quilts: “I’m just a plain person, but I do like to let people know there is a Queensborough, and that’s why I’m proud of my Queensborough quilts.” Tyson asks her, “What do you like people to know about Queensborough from your quilts?” And Goldie gives the perfect succinct statement about Queensborough, managing to say in a minute or so what I’ve been striving all these months to capture in this blog:

“Well, I like them to know that there’s a happy little place in the country – ‘way back north,’ as people say – and they are a happy people. We have suppers and [Women’s] Institute and UCWs [units of the United Church Women] and all these organizations and things, and everybody helps everybody. And some people go in the [general] store and they visit, and there’s a bench there and they just sit down – and it’s just a happy place. And a lot of places are closed up. And so that’s why I make these Queensborough quilts, to show them what Queensborough was like. Because things change, and I want people to know there is a Queensborough.”

Goldie, when it comes to Queensborough – and many other things – you are my hero and my model. I too want people to know that “there is a Queensborough.”

Tomorrow: the story of Goldie’s most famous quilt, and what almost happened to it.