This confirms what we in Queensborough have known for a long time: the pot of gold is here! A beautiful rainbow over the millpond on the Black River, in “downtown” Queensborough, this past Sunday. (Photo courtesy of Queensborough Beautification)

Have you had occasion to visit Queensborough recently? If you haven’t, and if you are within driving/biking/motorcycling distance (you readers from western Canada and the U.S.A. are off the hook), you really owe it to yourself to come have a look-see, as people used to say. Our little hamlet is looking so nice!

For that we owe an awful lot not only to individual property-owners who are making their gardens, and their properties in general, look anywhere from tidy to downright gorgeous, but especially to the volunteers with the Queensborough Beautification Committee, who’ve been doing an outstanding job of keeping the village’s public spaces looking terrific.

Ah, but photos speak so much better than words. So herewith, a visual tour of our little piece of heaven in this splendid summer of 2015 (with full credit and thanks to the good folks at the Queensborough Beautification Facebook page, the source of several of these pictures):

Newly painted “bridge” (over a culvert and tiny stream on the sidewalk leading to St. Andrew’s United Church) decked with lovely flower baskets – both baskets and bridge-painting thanks to the volunteers with the Queensborough Beautification Committee. (Also note the day lilies, which are looking lovely all over Queensborough.)

Jos Pronk of the Beautification Committee repairing another sidewalk bridge, this one at the north end of the village. (Photo courtesy of Queensborough Beautification) 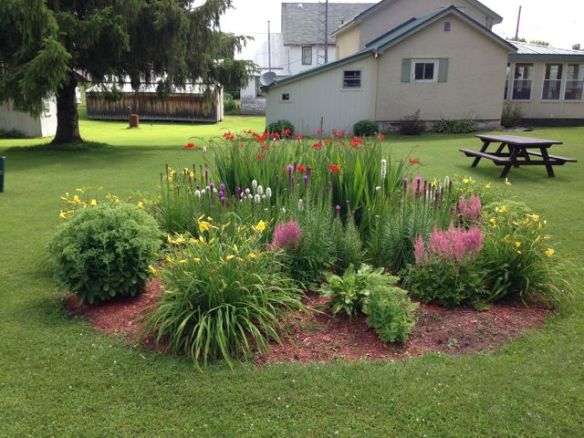 Ruth Steele’s own garden, which (fortunately for Raymond and me, because we get to look at it every day) is right across the way from the Manse. Isn’t it beautiful? 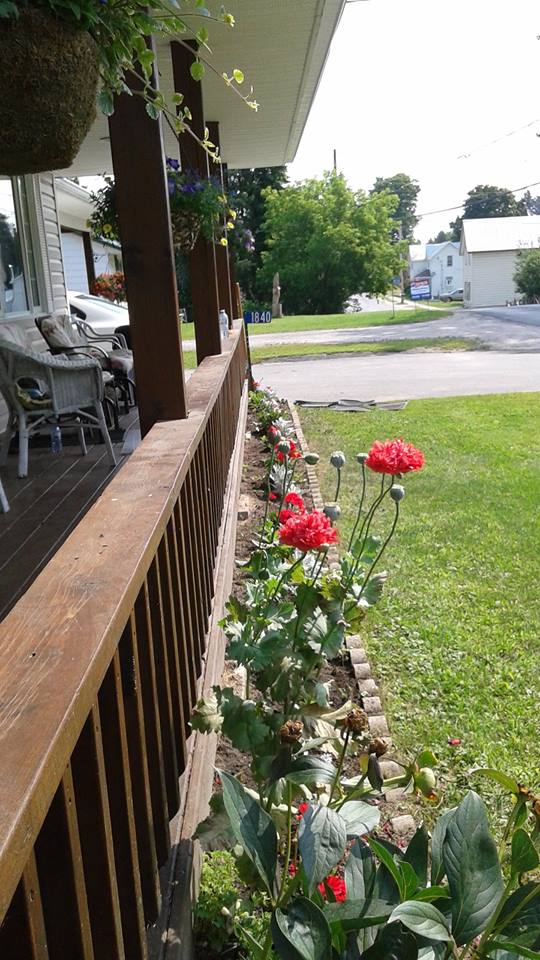 Our sign about the history of Queensborough, with flower plantings thanks to a group of volunteers, beside the Black River.

Some unsightly (and potentially dangerous) old broken-up concrete, containing rusty rebar, that had been plunked at a streetcorner. This is what it looked like before the municipal cleanup prompted by local residents… 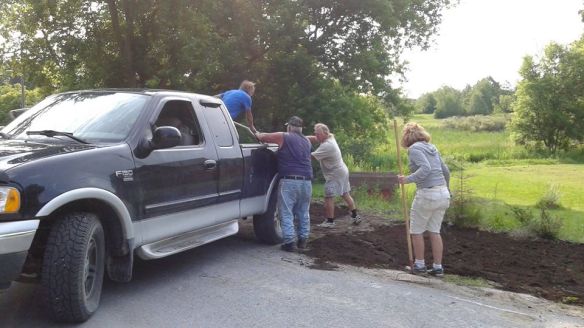 And this is the “after” shot, with residents John Barry (who does an enormous amount of beautification work on his own time and dime), Jen Couperus, Ed Couperus and Tom Sims spreading topsoil donated by the Walters family over the spot from which the concrete was removed. (Photo courtesy of Queensborough Beautification)

Amazing lilies, clematis and other lovely things in the front garden at Pat Steele’s home. 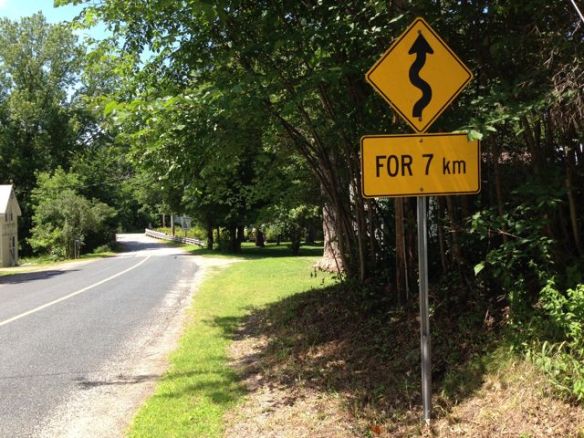 Another uncovered hidden sign, this one, rather amusingly, warning: “Hidden Entrance.” 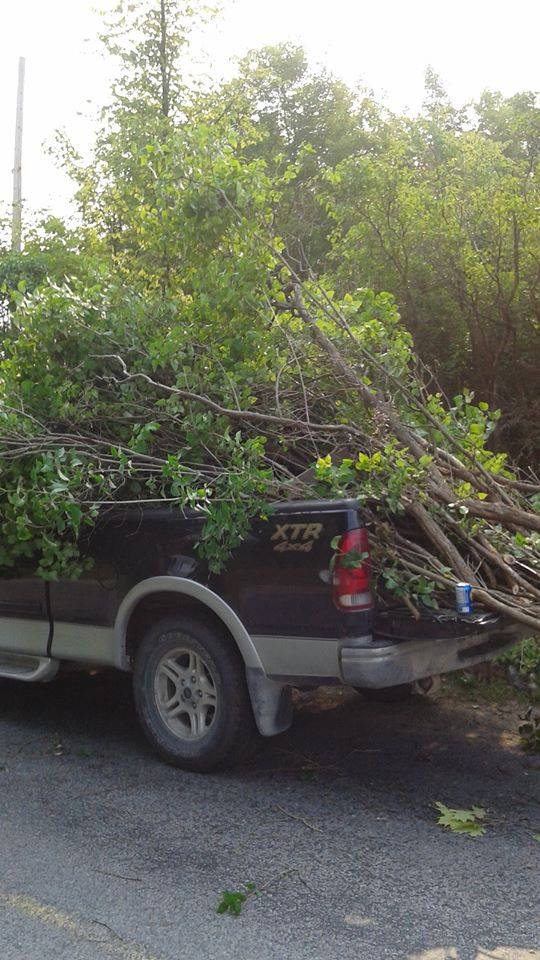 John’s truck loaded up with some of the brush that he and Chuck cut away from the signs. (Photo courtesy of Queensborough Beautification)

I’m not sure what these pretty white flowers are, but they smell even nicer than they look! On the way up the hill toward St. Andrew’s United Church.

The made-in-Queensborough street signs by Jos Pronk and the fantastic flower baskets put up all over town by Queensborough Beautification – and click here and scroll down a bit to the July 5 post to see a fun little video of the man who carefully waters the plants every evening, John Barry, hard at work.

I’m happy to say that here at the Manse, we’re working to hold up our end on the beautification front. Here are the first of our phlox to have bloomed this season.

Hey, it’s not just us who think Queensborough is beautiful! Check out the latest issue of Country Roads magazine, with Queensborough’s Thompson House, home of Elaine and Lud Kapusta, gracing the front cover (and inside a brief text about it by yours truly). How nice is that?

All in all, people – wouldn’t you really rather be in Queensborough?

The first three-quarters of Dominion Day 2015 (don’t get me started on “Canada Day”) were cloudy and rainy here in Queensborough, but as I was taking this photo of the Manse the sun suddenly broke through. A good sign for a momentous (in my life, anyway) anniversary!

Happy Dominion Day, everybody! As you can see from the photo I took today, the “new” (well, new as of 1965, a mere half-century ago) Canadian flag has replaced our usual Ontario flag in adorning the Manse in celebration of July 1. As I’ve reported before, Raymond likes to use his ever-growing flag collection to mark special national and regional days. If you noticed Quebec’s fleurdelisé flying at the Manse a week ago today, that was in celebration of St. Jean Baptiste Day, Quebec’s “national” holiday; and you’d better brace yourself for the Stars and Stripes this coming Saturday, the Fourth of July.)

Let me back up a tiny bit.

The weekend before last, we were thrilled to bits to have a visit from Raymond’s sisters Eloise and Jeannie, coming all the way from their homes in the Boston area, and his daughter Dominique, from Montreal. It was the first time that any immediate members of Raymond’s far-flung family have been able to come see us here in Queensborough, and it was just delightful to have them and to show them the Manse and the beautiful area in which we live. It was also a very lively time; normally the Manse is a pretty quiet place with just Raymond and me knocking about in it (and especially since we no longer have Sieste the Manse Cat to share her point of view with us). With four women and Raymond in the house, the place was full of chatter and laughter, and that was just great. 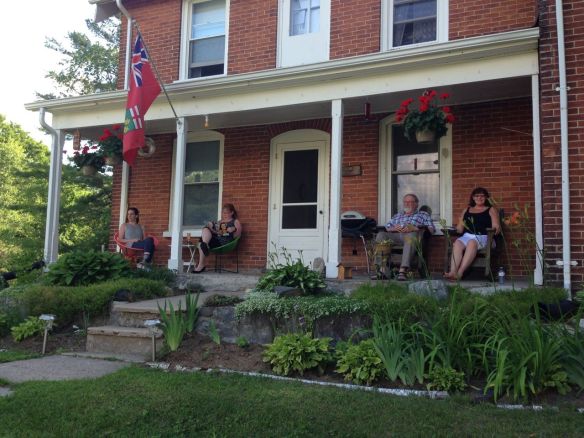 But at one point in the weekend, I had occasion to leave the hubbub behind for three-quarters of an hour and enjoy some quite reflections on this place in which we live. The occasion in question was Raymond having forgotten to buy a key ingredient of his Caesar salad – that would be the romaine lettuce, a rather important part of the whole operation – and I volunteered to drive in to town (Madoc, in this case) to pick some up. It was about 7 p.m. on a glorious summer day, the time when late afternoon is just turning into evening, when the shadows are ever so slightly beginning to lengthen and the slowly declining sun puts a golden evening glow on everything.

It’s only 10 or 12 minutes to drive to Madoc from Queensborough, but those 10 or 12 minutes there and back were so filled with the beauty of this place that my eyes were brimming with tears more than once. That golden glow that I mentioned made everything – the rolling farmland, the rocky outcrops, the silos, the old farmhouses, the split-rail fences, the pretty flower displays at the entrance to Queensborough, the gardens at some of the places along the way – look its absolute best. The quiet of the evening was broken only by birdsong. “We are blessed,” I thought.

My family – Dad and Mum and (left to right in front) me, my sister, Melanie, my brother John and my brother Ken – in about 1968. At the Manse, of course.

And then something struck me. It was this: that it was at this exact time of year – end of June/beginning of July, when everything is green and golden, and summer holds out its promise, and life is good – that I first came to Queensborough, as a child of four; and it was also the time when I left Queensborough (though not forever, as it later turned out), as a 15-year-old, having spent all of my formative years in this lovely and never-a-dull-moment little place. My dad, the newly ordained Rev. Wendell Sedgwick, arrived here to begin his career as a minister at the start of July 1964, with my mum and three little kids (we later became four) in tow; the only thing I remember about that first day in Queensborough was the shouted warning from our across-the-street neighbour Will Holmes not to drink the water that came out of the tap. (More on that story, and the years of carrying buckets of drinking water from one of the village’s communal wells, here.)

Actually, there is one other thing I remember about that first day in Queensborough, which could very well have been 51 years ago this very day: It was bright and sunny and warm and summery. Just that kind of day that this July 1 has turned into. Queensborough looked its best.

As it did on another sunny summer day 11 years later, on or about July 1, 1975, the day that my family left Queensborough as my dad took up a new pastoral charge in Seymour Township, outside Campbellford, Ont. So much had happened in those 11 years, in Queensborough and in the world. Humans walking on the moon. Vietnam. Trudeaumania. Watergate. Hippies. Woodstock. The Rock Acres Peace Festival!

And I had grown up. And watched and read about all those exciting things happening in the larger world from right here at the Manse in Queensborough. I remember how very sad I was as we drove away, to be leaving behind that golden past and that golden place, the place of my childhood. “I never dreamed you’d leave in summer,” a pretty song sung by one of my (and my dad’s) heroes, Joan Baez, goes. Well, I never dreamed that I’d leave in summer. But I did.

And was gone for a long time. And lots happened in the interim, both to me and to Queensborough.

But now … well, now I am home again. And you regular readers all know the story: how Raymond and I bought the Manse, on a whim and a prayer (i.e. not really knowing what on earth we were doing or getting into), back in January 2012. How we quickly began to love our connections with this beautiful and little-known part of the world as we visited when we could, on the occasional weekend away from home and work in Montreal. And how we ended up, counter to all expectations, actually moving here in October 2013, Sieste in tow to make it really official. And how life has never been the same since. In a good way. I am so, so happy to be home. To have returned. In summer.

Today, the rest of Canada celebrates our country’s 148th birthday, and that is an excellent thing. But I hope you will excuse me, as I sit here in one of the most beautiful parts of Canada, if I celebrate another sort of anniversary, a far more personal one: the one in which, 40 years from when I left, I am back from my wanderings – not quite in the wilderness, where some people famously spent 40 years, but wanderings nonetheless. It is summer; and I am home.